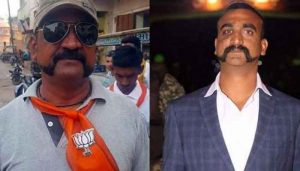 NEW DELHI: In an attempt to obtain maximum votes and political mileage in the current elections, Modi’s Bharatiya Janata Party (BJP) resorted to a cheap trick like a false image of IAF pilot Abhinandan Varthanam is shared in social networks urging Indians to vote for the ruling party

The image is going viral on Facebook and other social media platforms with an assertion that the Indian Air Force pilot supports the BJP and has voted for Prime Minister Narendra Modi.

In the photo, the pilot’s doppelganger, with Varthaman’s handlebar mustache and a pair of Ray Ban sunglasses, can be seen using a muffler with the lotus symbol of the BJP.

By carefully examining the image, the viral image tells its falsehood and the Indians point to the deception of the political party. The Air Force of India has also declared that the cartel is false.

According to reports, the Indian constitution does not allow personnel in the service of the armed forces to be part of political campaigns.

IAF pilot Abhinandan Varthanam was captured when his fighter plane was shot down by the PAF in the dogfight on February 27. The pilot was later released as a gesture of peace by Prime Minister Imran Khan.

The elections in India are held in seven phases in April and May, while the Hindu nationalist BJP of Modi seeks a second term.

According to critics, the BJP hopes that the government’s recent tough stance against Pakistan will help it maintain its popularity despite suffering a setback in December when it lost three key state elections to the opposition Congress party.