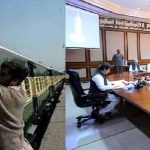 Islamabad: (Dunya News) Federal Cabinet meeting has decided to end trade ceremony with India. The meeting also approved the closure of the Thar and Compromised Express in support of the decisions of Minister of Railways, Sheikh Rasheed.

According to details, a meeting of federal cabinet chaired by Prime Minister Imran Khan was held in which important decision was taken to end trade with India.

The meeting also approved the closure of the Thar and Compromised Express. It is to be noted that Railway Minister Sheikh Rasheed has announced that the two trains will be closed and said that as long as he is a minister, he will not start transporting trains to India.

Meanwhile, the Ministry of Commerce says that bilateral trade is currently in favor of India. The annual bilateral trade volume between Pakistan and India is $ 2 billion 12 million, while Pakistan’s imports are $ 1 billion 80 million. Pakistan’s exports to India amount to $ 324 million.

It should be remembered that the National Security Committee had earlier decided to suspend bilateral trade with India.

Following the decision of the Federal Cabinet, the Ministry of Commerce has issued an order to suspend imports and exports from India.