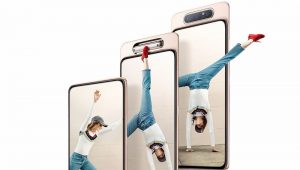 This phone and its rotating camera are true definitions of technological innovation. This premium midrange also features the new Samsung Infinite screen that was announced last year.

The phone has a brushed metal look with the triple sensor rotating the camera on top. The curved glass is installed on both sides of the phone. The sensors are arranged horizontally. It comes in three colors: Phantom Black, Angel Gold, and Ghost White. The fingerprint sensor is inside the screen.

Samsung Galaxy A80 has a 6.7-inch Super AMOLED screen with 1080 x 2400 resolution and a Sony 20: 9 aspect ratio. The screen has no notch or perforations to distract from the screen without a full-screen.

Unlike other Samsung premium and media phones, the A80 is not waterproof or dustproof and has no stereo speakers or headphone jack, which is unfortunate, since that is what keeps Samsung above all the others these days. 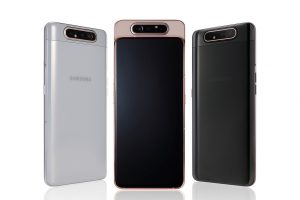 The Galaxy A80 is the first smartphone to use the Qualcomm Snapdragon 730 chip, which was announced yesterday. It has an octa-core processor with 2x Kryo 460 Gold cores operating at 2.2 GHz (similar to A75) and 6x Kryo 460 Silver with a clock speed of 1.7 GHz (similar to A55). The Adreno 618 is in charge of the graphics.

However, it only has one variant with 8 GB of RAM and 128 GB of built-in storage. There are no higher capacities available, and the phone does not have an SD card slot for expandable memory, which is strange by Samsung standards.

It runs on Android 9.0 Pie with a user interface. 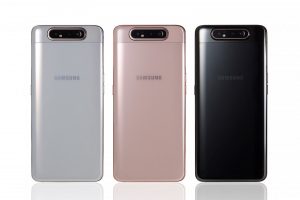 Upon reaching the star of the show, the rotating camera has a main sensor of 48 MP, an ultra wide sensor of 8 MP with FOV of 123 degrees and the third sensor of flight.

Although the camera is making news and seems to be the best solution to save space and hardware, we are concerned if the rotation spring will last a long time. Since every time you take a selfie, the small engines will rotate the camera. You can also manually slide the part of the camera, but it is more a forced approach.

While a 48 MP selfie camera should be the best in its class and even allow unparalleled selfie videos, the sensor is the same one used in the Xiaomi Redmi Note 7, which costs at least three times less than the A80.

Samsung Galaxy A80 includes a 3700 mAh battery that supports a fast charge of 25W, but like the A70, it does not support wireless charging. It is available at a price of $ 730 and will go on sale at the end of May. 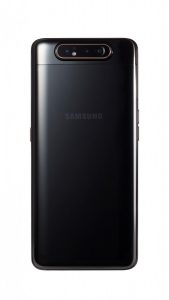