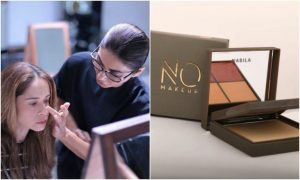 Nabila has become the official hairdresser and makeup stylist for the IIFA 2018 Awards.Nabila and her team are known for creating magic with their work in several local fashion weeks and awards ceremonies.For some time, she had her eyes set on the international market and has been constantly working to make this happen.

And now the time has come when the biggest awards ceremony in Bollywood has announced that the Nabila N-Gents and Zero Makeup brands will be the official makeup and hairdressing partners at IIFA 2018.
This is a great achievement for Nabila because the Awards of the Film Academy of India are a great success and are seen all over the world.

Nabila will travel to Bangkok next month with more than 75 stylists to work their magic on some of Bollywood’s biggest names.

But this is not all, Nabila will also launch her all-in-one make-up palette, Zero Makeup in India in the coming months. IIFA has become the perfect platform for her to show her brand on.

Nabila will now replace MAC Cosmetics, which has been the official hair and makeup partner of IIFA for many years.