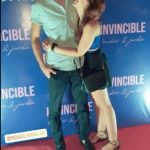 Aamir Khan’s daughter, Ira Khan, has been in the spotlight again and again for sharing photos with her rumored boyfriend Mishaal Kirpalani on her Instagram. While the star girl never cared what people would say and shared what she felt comfortable posting on their social networks, she has always been under scrutiny when it comes to the status of their relationship. Now, the star child has finally cleared up all the confusion and confirmed that he is dating Mishaal Kirpalani in the most beautiful way possible.

Ira Khan asked her fans and followers the questions they wanted to ask her in a “Ask Me” session on Instagram. From his personal life to his interests in cinema, the divas discovered everything. When a user asked if she was dating someone, Ira shared a picture with her boyfriend Mishal Kirpalani in which she can be seen embracing him and tagging him in the story as well. If this does not confirm that Ira is dating Mishal, then what will he do?

Check out his answer here-

🥳 happy birthday babe❤️❤️. You’re simple. You get happy with a birthday post. For my birthday I want to binge watch Netflix together….just about 140 million hours of content.😘 #netflix

Often, Ira breaks the internet while sharing images with Mishaal on their social networks. Mishaal also continues to post photos with Ira. On Ira’s birthday, he won many hearts with his wish and wrote: “Happy birthday, baby, you are simple, you are happy with a birthday message, for my birthday, I want to see Netflix together … only about 140 million hours of content. #netflix “.

During the Ask Me session, Ira also revealed that she is currently in Dharamshala and enjoys her vacation there. When asked about the movie she is currently watching, the star girl revealed that she is looking at Lucifer these days and tries to see at least one movie a day. Speaking of his plans and career in Bollywood, Aamir Khan revealed earlier in Koffee Joharten by Karan Johar. “I’m not sure what she has in mind, but I suspect she likes the world of cinema and film, so maybe that’s where she would want to go, I do not know.”

Hope your Spring Break was sunny and smiley as @mishaalkirpalani’s, which of course, I piled onto ❤❤❤ 📸 @sahirahoshidar

On the other hand, speaking of his son Junaid, he said: “When Junaid said he wanted to go train as an actor, the first thing I said was:” Look, you must follow your heart and do what you want. But when the time comes for you to take your first step as an actor, if I feel you’re not good enough, I’ll tell you in your face and I will not do anything to support you. “Because that will do it, being unfair to the film and it will be unfair to the public, if you are good, then you will have opportunities, maybe from me, maybe from others, that also goes to Ira,” he said.

New Year’s is such a weird concept. But we go along with it anyway. And its fun.. So Happy New Year!❤

Welcome to the family, Simba.