Zahid Ahmed in his next Eid telefilm with Saba Qamar 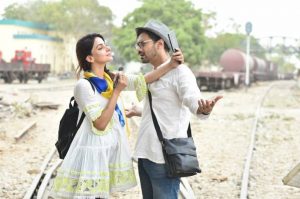 Zahid Ahmed in his next Eid telefilm with Saba Qamar.Like almost every Eid-ul-Fitr, more than a week away, there is a large list of telefilms that are scheduled to air during the festive season.As for 2018, although some of them have already been filmed, others were recently announced with Naiki Kar Doob Marr as the most recent addition to the list. The next telefilm features Zahid Ahmed and Saba Qamar in key roles and is a “pure comedy” according to Zahid.

“It’s a pure comedy that will be fun to watch,” said the actor, who started filming for the project two days ago in Karachi, in a telephone conversation with Instep.

This will be the third time that Zahid and Saba will share the screen space since the two have appeared in Sangat and Besharam drama series in the past.

Although Saba was one of the reasons why Zahid accepted the offer, the actor reported that he gave a nod to the project because it was a comic book script, something he had never really done before.

Speaking of the history and genre of the upcoming telefilm, Zahid added: “It is a love story of a young couple, it is aimed at young people who are not willing to engage in relationships.” Getting into a relationship is easier, but keeping it it’s hard “.

Directed by Fahim Burney and written by Atiq Inayat, it is likely that the telefilm will air on the first day of Eid.