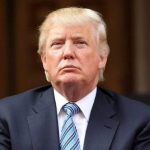 “I think Iran would make a big mistake if I did something,” Trump told reporters as he left the White House on Monday night for an event in Pennsylvania. “If they do something, it will be END_OF_DOCUMENT_TOKEN_TO_BE_REPLACED